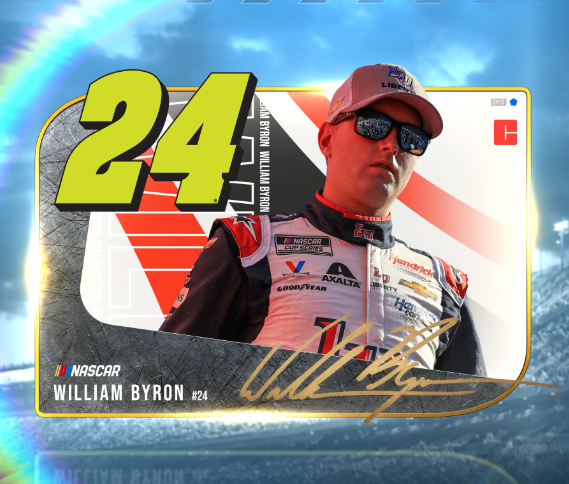 The 2022 NASCAR ICON Driver Series is the FIRST EVER officially licensed Digital Trading Cards of NASCAR Drivers. On 12.15, collect ICONs to add some speed to your Candy collection.

This guy’s won at every level, including a Truck Series championship (2011) and Xfinity Series title (2013), and has four wins and 68 Top-10s in his Cup Series career.

Over a long and consistent career, McLeod has accumulated more than 300 starts over racing’s top three divisions – including a seventh-place finish at Daytona in 2022.

Suarez became the first Mexican-born driver to win on the Cup Series with a checkered flag at Sonoma in 2022, and has 47 Top-10s in 197 starts.

His wall ride at Martinsville was one of racing’s most viral clips of all-time, but this can guy flat-out race; he has two wins and 30 Top-10s in the Cup Series.

The son of a racing legend, Burton became the first driver born in the 2000s to make a Cup Series start, and also finished third at Indy in 2022.

One of stock car racing’s most accomplished drivers, Keselowski 31 wins and 231 Top-10s in a decorated 15-year Cup Series career.

From go-karts as a child and now to the Cup Series, all this guy does is keep getting better. He finished fifth at Atlanta in 2022 for a career best result.

His Shifter Karts background helped him get to the Cup Series, and Bilicki posted his best finish in 2022 with a 16th in Atlanta.

After six wins in the National Series, Wallace made history in 2022 when he became the first Black driver to win a Cup Series race in more than 50 years.

Three wins, 78 Top-10 finishes in the Cup Series, and in 2022, history: Jones became a two-time Southern 500 winner 55 years to the day after Richard Petty won his only race at Darlington.

From Bandoleros to the Truck Series and now in the Cup Series, Dillon is a popular and steady veteran of 184 races over a nine-year career.

Success has followed Briscoe from a young age, and in 2022, he notched his first career Cup Series win at Phoenix, securing a spot in the playoffs.

A long-standing veteran of the Cup Series, Almirola has proven to be one of the circuit’s most reliable drivers. He has 91 Top-10s and three victories over a 15-year career.

Ware can successfully drive just about any car, on any type of track; in 2022, he logged a Cup Series career-best sixth-place finish at the Daytona night race.

A popular driver with 18 wins and plenty of racing lineage, Elliott won the 2020 Cup Series championship – making he and his father (Bill) the third father-son championship duo in history.

After Rookie of the Year honors on three different circuits, Bowman graduated to the Cup Series and hasn’t looked back; he has seven wins and 69 Top-10s in an eight-year career.

From open wheels and dirt tracks to the Cup Series, Larson loves to race and compete. He won Miami-Homestead in 2022, and has amassed 19 career wins along with 146 Top-10s.

With a start in the virtual racing world (iRacing), Byron may have an unconventional path, but he’s been impressive early in his career. At just 24, he has four Cup Series wins and 62 Top-10s.

No matter where he’s racing, Bell can get it done. After a Cup Series debut in 2020, he’s already racked up three wins and 42 Top-10s in less than 100 career starts.

The 2006 Rookie of the Year is now one of the foremost names in racing. Hamlin has grabbed 48 victories and 312 Top-10 finishes (including three Daytona 500 wins) in his 18-year Cup Series career.

Truex Jr.’s go-karts background taught him how to race, and his resume stands with anyone’s; he has 31 career wins, 261 Top-10 finishes and has started more than 600 Cup Series races.

BMX racing, go-karts, Cup Series…McDowell can do it all. He finally earned his first win at the 2021 Daytona 500, and is a superspeedway demon with third-places at Sonoma and Talladega in 2022.

The impressive 22-year-old rookie started all 36 races for Front Row Motorsports in 2022, highlighted by a fourth-place finish at the Indianapolis Grand Prix.

A transition to spring car racing in 2003 proved a wise choice, as Stenhouse Jr. has two wins and 45 Top-10s in a productive 12-year career, and has won at both Daytona and Talladega.

Experience, production…with AJ Allmendinger, you get both. The veteran driver has run 392 Cup Series races in a 14-year career, including two road course victories at Watkins Glen (2014) and Indianapolis (2021).

He’s only 23, but Haley already has wins in each of the three National Series and is only getting better. He has seven Top-10s and a 2019 win at Daytona on his resume.

Decorate your Candy collection with drivers from the 2022 NASCAR ICON Driver Series!

Read our collection announcement for more information on Driver Series