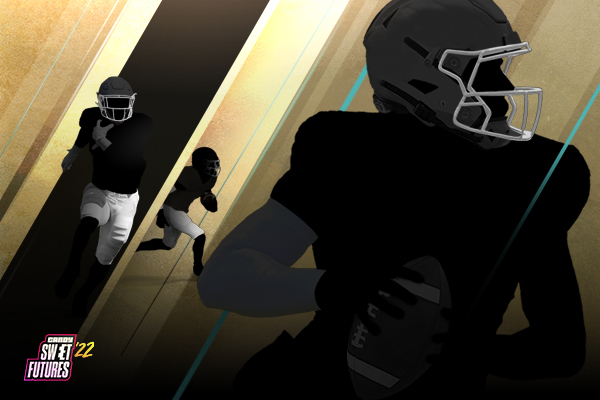 You know it’s football season when the air gets cooler and the leaves get crunchier. Another tell-tale sign is that Candy Sweet Futures is back with another round of collegiate football players! We’re excited to welcome new gridiron stars into the Candy Fam alongside some familiar names in new places.

This fall there are two drops of Candy Sweet Futures Football players. The Class of 2022 will feature 17 players total. Bijan Robinson, Sam Hartman, DJ Uiagalelei, Josh Downs and Noah Sewell are a few highlights you’ll find in the first drop and more names will be revealed in the coming weeks.

To enhance your Candy Sweet Futures experience this fall, look out for more information on a collection challenge coming soon!

Bijan Robinson - Texas | The Texas running back is entering his third season as a Longhorn. Robinson lit up the field during his first two seasons with a total of 1,830 rushing yards on 281 attempts with 15 touchdowns (11 last season). Before a season ending elbow injury last November, Robinson was a serious member of the Heisman Watch List. Going into this season, Robinson is #8 overall on the mock draft and #1 for running backs.

Bijan Robinson has built himself into a catalyst for the Longhorn’s offense. Quick on his feet, effective route running, and constantly forcing mis-tackles are the triple threat that already make him an impact player this season. With a pair of touchdowns in the first two games, he’s a running back to keep your eye on this season and watch through the draft into the league.

Josh Downs - North Carolina | North Carolina top player Josh Downs is back for his junior season after an electric sophomore year. He’s entering this year a projected first round pick and is ranked a top 5 wide receiver in mock drafts.

During the 2021 season, Downs became one of the most productive receivers across college football with 101 catches for 1,355 yards and 8 touchdowns. In the 2022 opener, Josh picked up right where he left off with 9 catches, 78 yards and 2 touchdowns. Downs is one to watch, especially one to keep an eye on if you’re the opposing team.

DJ Uiagalelei - Clemson | Starting quarterback DJ Uiagalelei set the tone of the season he plans on having in the early weeks. Feeling noticeably comfortable, Uiagalelei had the most completions and most effective game in his college career in his Week 2 game, going 21 of 27 on Saturday for 231 yards. It was his second consecutive game throwing over 200 yards, giving his team a 2-0 record.

Sam Hartman - Wake Forest | Three year starting quarterback, Sam Hartman is back for year four despite some unknowns. Recently diagnosed with Paget-Schroetter syndrome, Hartman’s future on the field was the biggest question mark. After surgery to remove a blood clot, he got the news he needed from both doctors and coaches and was able to return to the field for the September 10 game.

Leading his school to an 11-3 record last year, Hartman accounted for 50 touchdowns for over 4,500 yards last season. Mastering the high-tempo offensive attack, Hartman brought his fight from rehab to the field. With 4 touchdowns and 300 yards in his 2022 debut, there's a lot more battle in him to see.

Noah Sewell - Oregon | Competition starts in the family right? Especially if you have brothers. Inside linebacker, Noah Sewell, hopes to follow his brother as an early draft pick. He is a projected top 10 draft pick this year. The Oregon third-year sophomore racked up 53 solo tackles, 4 sacks, and one interception last season.

Sewell’s versatility on defense makes him a special kind of weapon for the Ducks. He led the team in tackles in the two previous seasons and ended last season leading all Power 5 linebackers with a 31.2% pass rush win rate. He’s motivated by his brothers and the urge to be the best. While working on passing coverage this off season, Noah Sewell is definitely a name to watch entering this season and later in the draft.