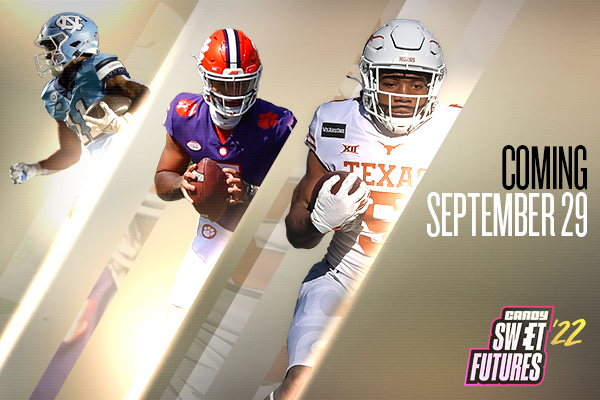 As we get closer to our Candy Sweet Futures Football drop, we want to make sure you have all the information you need. This class of athletes features 17 players from 14 different schools.

This Fall, we are bringing our athletes’ performances off the field and into your Candy Collection through our Candy Sweet Futures 2022 Dynamic Challenge beginning Oct. 31.

For more information, please check out our FAQs!

*THIS SWEEPSTAKES IS IN NO WAY SPONSORED, ENDORSED OR ADMINISTERED BY, OR ASSOCIATED WITH THE ROSE BOWL.

Nolan Smith - Georgia | Need a highlight of the 2021 season? Smith has got you covered. For the last play of the National Championship, Smith sacked quarterback Bryce Young, locking in the first title for the Bulldogs in 41 years. The outside linebacker is ready for his senior season at Georgia. Ranked No. 5 overall and No. 2 in outside linebackers in a recent mock draft, Smith is looking to add to his 8.5 career sacks.

Havoc will be caused all over Athens at the hands of Smith this season. His quick hands and bursts of speed make him dangerous in the backfield. A second-team Preseason All-American, Smith is one to watch as the Bulldogs come back as reigning champs.

Jack Bech - Louisiana State | A local Louisiana high school wide receiver turned LSU top receiver. The 6’2” 215 lb. Jack Bech followed his two uncles who were LSU football alumni. Grounded by his faith and deemed a natural leader by work ethic and performance, it was no surprise Bech had early success on the college stage.

Going for 489 yards on 43 receptions in his freshman season, the four-star recruit is making his way to the number one look for LSU quarterbacks. Bech has turned himself into a pivotal playmaker for the Tigers. Mix in the confidence he’s grown during his time there, and he will leave a mark on Tiger Stadium.

Taulia Tagovailoa - Maryland | A name already known by football fans everywhere thanks to his professional quarterback brother, Taulia Tagovailoa plays his own game at Maryland. The redshirt junior has already led the Terps to a 2-0 record. Connecting on 27 of 31 passes for 391 yards and 4 touchdowns, Tagovailoa settled into his rhythm in Week 2.

Bo Nix - Oregon | Bo Nix has taken his talents and moved them to the Pacific Northwest after three seasons in the South. Known for his improvisation in the pocket, he’s a good fit for the No. 11 Ducks. Former Georgia Coach, Dan Lanning, considers Nix a leader who moves the ball well.

He started his season in a new uniform, but faced a very familiar defense in the opener. The Georgia defense, which is the home of another 2022 Sweet Future, is quite used to playing Nix. Nix looked comfortable out there and made smart decisions to run when he couldn’t beat out the Bulldogs by passing. With 21 first downs, the Ducks Offensive Coordinator let Nix play to his strengths.

Jadon Haselwood - Arkansas | Recent transfer, wide receiver Jadon Haselwood moved his talents from Oklahoma to nextdoor neighbor Arkansas. Before he entered the transfer portal, Haselwood had a pretty stellar season. He had 39 catches for 399 yards and 6 touchdowns just last year.

The former five-star recruit joined his old high school coach on the Razorbacks sideline. Haselwood wanted to be put in a place to contribute more and he feels Arkansas is the place after they lost their best receiver in last year’s draft. A natural born leader, Haselwood has found his place on the new turf so far this season.

Braelon Allen - Wisconsin | Badger Sophomore Braelon Allen didn’t have to look far from home when it came to finding the right school. Dairy-State grown, Allen is already leaving his name in the record books for his performance last season and the start of this season. In 2021, the running back recorded 12 touchdowns for 1,268 yards.

In week 2 of this season, he set a personal and school record. With 3 touchdowns in just the first half, Braelon Allen became the fastest Wisconsin running back to reach 17 career touchdowns in 15 games or less, since the ‘06-’07 season. He’s following big footsteps, but Allen seems to be fitting the shoes just fine. He’s already putting his name in the basket with Heisman winners and professional studs.

JT Daniels - West Virginia | JT Daniels might have been playing musical chairs for a little, but he finally found his seat. After two seasons at University of Southern California followed by two seasons at University of Georgia, Daniels has made the move to West Virginia. He painted a pretty picture at both schools. He was the second true freshman quarterback in USC history and went 7-0 as a Bulldog starter.

Daniels started the 2021 season as a Heisman favorite before being knocked down by injuries. You’ll be sure to see his skills in full force at WVU, a pure pocket passer with almost a full starting offensive line returning from last season. Reuniting with his USC offensive coordinator and seeing a lot of talent throughout the Mountaineer roster, Daniels is a name you don’t want to overlook.

‍Ga-Quincy McKinstry - Alabama | More commonly known as “Kool-Aid,” McKinstry is back in the cotton state after a breakout freshman season. Last year, he played all 15 games at corner and started in six. Back at corner this year, Kool-Aid is also on punt return duty. The five-star recruit started his college career as a member of two different rosters, basketball and football, but announced this year he’ll be focusing only on football.

Already recording a sack and 6 solo tackles this season, Kool-Aid will be mayhem on defense and later in his football career. His smile as big as the Kool-Aid Man’s earned him his nickname from his grandmother.

Malachi Moore - Alabama | Defensive back, Malachi Moore, just started his third college season. Moore had a stellar true freshman season; starting 11 games with 44 tackles, 3 interceptions and 1 fumble returned for a touchdown. Unfortunately a back injury put him out for the rest of that season. With the time spent resting his body, studying the playbook, and training, Moore is expected to be back at his freshman production level this season.

An explosive player, Moore has the technique, hand-eye-foot coordination and placement and control to be a professional grade defensive back. Alabama fans are ready to see him on the field this fall.

Zay Flowers - BC | The 11th of 14 children, it is safe to assume that Zay Flowers grew up with a lot to do, always someone to run around with, and plenty to get competitive about. A scholarship player in 2019, turned All-Conference and breakout player in 2020, Flowers entered this season as one of the top receivers and a strong prospect to enter the league.

So far in his college career, Flowers has racked up 122 passes for 1,979 yards and 17 touchdowns. A dual threat, he’s also carried the ball 27 times for 195 yards and a touchdown thanks to unmatched speed and agility. Flowers is entering the 2022 season with a target on his back and a “deep threat” title in college football; pay attention now, good shot he blooms into a big leaguer.

Sevyn Banks -  Louisiana State | Another product of the Covid extra year of eligibility, Banks made the move from Columbus, OH to join Bech in Baton Rouge. Assuming he stays healthy, Banks should have a pretty impressive season.

The 6’2” 205 lb. cornerback, Banks has the versatility and athleticism to defend the inside and out, making him a better match against larger guys like a tight end. He also has the mental toughness to fill the role of corner Coach Kelly wants him to. The positive doctor's note that was received, was the first step to Banks career past college.

Mycah Pittman - Florida State | Former Oregon Duck, Mycah Pittman, elected for a sunnier field and transferred to Florida State. Pittman might have not seen the success he wanted in the PNW, but it came quickly and often while playing for the Seminoles in preseason. Playing bigger than his 5’11” 211 lb. frame, he earned the title “alpha-like receiver” and further cemented his NFL hopes.

Still proving he can produce, Pittman already has 7 receptions for 89 yards this season. His toughness showing by jump catches in traffic and dropping his shoulder for that extra yard, Pittman is a key target for FSU quarterbacks making their offense more dynamic and explosive.