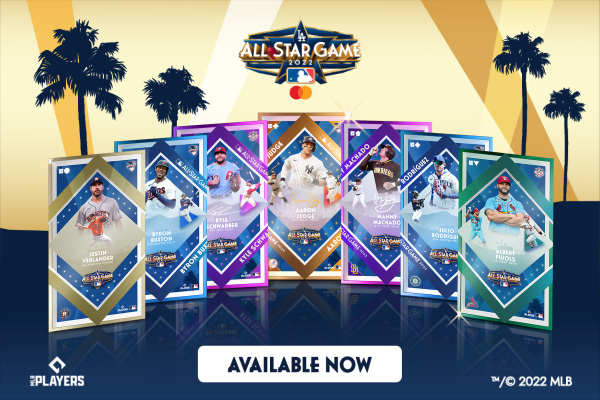 The MLB All-Star Game has been a seasonal event since July 6, 1933. Each year 80 players have the honor of being voted onto the All-Star roster; 40 from the American League and 40 from the National League.

Candy is continuing the celebration of these players with our 2022 MLB ICON All-Star Series. These players represent the hard work and dedication to the game of baseball.

The 10 players highlighted are part of our burning challenge! To earn an Epic ICON of a player listed below, you must burn for it.

José Ramírez - The Cleveland lifer is having quite the season. J-Ram is leading the Guardians in almost every category offensively and is second in the league in RBI. He is swinging more, but not missing more with a sub-10% strikeout rate, and a career K rate of just 11.8% over his 10 years in the league. Part of one of the best teams right now, Ramírez has ⅓ of the team’s homers.

On top of being an elite hitter, he has incredible base running skills and is making his mark at third base. The number one third baseman at the start of this season, José Ramírez is proving he’s one of the league’s most skilled players.

Alek Manoah - Blue Jays starter, Alek Monoah, has been carving this season making him an early contender for the Cy Young Award. His debut was only last season after being the 11th overall pick in the 2019 draft; he has settled in nicely up north. Mic’d up at the 2022 All-Star Game, we could experience what it's like on the mound for Manoah, real-time reactions and his craft in the making.

Manoah has a sub-3 career ERA and has only allowed 14 runs in 69.2 innings this season. He’s a name to watch when we close in on the end of the season and Cy Young.

Manny Machado - Top 25 in all four major categories, Manny Machado is having himself a year. Third pick overall back in 2010, El Ministro is on his way to a career high WAR, proving the Padres 10-year $300 million deal was worth it. Considered one of the great players still looking for their ring, it's no knock to his skill.

Playing consistently well this year, Machado has 8 home runs and 27 RBI in the last 30 games. He’s building his Cooperstown Case more and more every year; this year as a team leader.

Nolan Arenado - Part of St. Louie’s elite infield, Arenado has broken into the NL’s MVP watch list - following only teammate Paul Goldschmidt. He’s top 15 in all four major categories offensively, and it's not insane to say he could get his 10th Gold Glove this year. In only his second season as a Cardinal, he’s slotted in perfectly as the cleanup hitter, with 9 home runs and 28 RBI in the last 30 games.

The new father is bringing his “dad-strength” with him on the field, adding some unnecessary but always welcomed power and finesse to his game. Keep an eye on the NL MVP voting because this Cardinal could come out on top.

Vladimir Guerrero Jr. - The 2021 All-Star Game MVP, voted back for year two. Vladdy earned his superstar label early on. With Miggy as a player comp., he shocked the league with his debut at 19 years old. Things had a slow start this season for Vladdy Jr. – That being said, if being an All-Star is a slow start then I think anyone will take it.

He is on the up and up in the second half of the season, leading the Blue Jays in home runs, RBI, and walks. The strong numbers offensively is just the tip of the iceberg with what he has to offer; there is a long and bright future for this superstar.

Gerrit Cole - Sitting pretty at number one in the league in strikeouts, Gerrit Cole has definitely made an impact on the Yankees’ wild run this season. The 2011 number one draft pick has cycled through three different clubs, but only ever had one season with a losing record.

With the Yankees’ rotation being as electric as it is, Cole is working hard to put himself in the Cy Young conversation. The $324 million man has had two no-hit bids this season, it’s possible he still pulls one off this season.

Juan Soto - The name of the trade deadline, the move of the 23 year old superstar will go down in baseball history. The now Padre has been top 20 in almost all offensive categories since he debuted. His hitting metrics are comparable to the greats and he’s on track to be a future Hall of Famer.

Now playing for sell-out crowds at Petco Park, Soto is continuing to do his thing. The reigning Home Run Derby Champion is adding nothing but hard to come by skill and dingers to South California.

Rafael Devers - According to Big Papi, Rafael Devers is the face of the Boston Red Sox, not going to argue with that. Another product of the baseball hotbed, the Dominican Republic, Devers is nearing a career high in all major hitting categories. Boston might not be having the season they were hoping for, but Devers sure is. Batting .324 he’s been consistent in a lineup that is not so much.

There’s no shortage of Devers praise coming from Ortiz. When the latest Hall of Famer includes Devers in the “Guys like myself…” statement, it's enough to watch him for seasons to come.

Pete Alonso - Becoming a franchise name on one of the hottest teams this season, Polar Bear Pete is having one of his best performances since his breakout debut year. The 2019 Rookie of the Year has back-to-back Home Run Derby titles and was +200 to go for a three-peat this year but just fell short. Fourth in home runs this season, the first baseman is vying for his first Silver Slugger.

Baseball fans can see how the game has evolved over the years, and how much harder it has become. Pitchers are throwing 100+mph fastballs and home runs are now deemed most valuable. Alonso is on a one-man mission to prove RBI are right up there with the franchise record of 25 game winning RBI this season.

Clayton Kershaw - A big name on the best team in the big leagues right now, Clayton Kershaw is building a solid case to Cooperstown. The three-time Cy Young winner came close to pitching a perfect game twice this season, making it through the 7th and 8th innings. Kershaw also has five ERA titles and won the pitching Triple Crown in 2011 solidifying his HOF case.

For the first time since he was 18 years old, Kershaw is not under contract with the Dodgers and is a free agent. What uniform he’ll have on next season is TBD, but we all know he’ll continue to dominate on the bump and take the Dodgers deep into the postseason.